Farmers Form A Company To Procure From Farmers 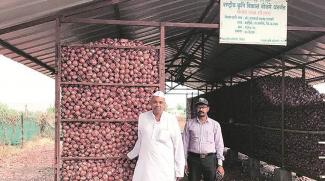 On August 28, Shivaji More and other directors of the Ramling Farmers Producer Company (FPC) in the village of Wadzire in Ahmednagar’s Parner taluka heaved a sigh of relief as the 113 tonnes of onion they had procured on behalf of the central government left for the Azadpur Mandi in New Delhi. This was the first time their FPC had ventured into government procurement. As a result, their farmers saved on the transport cost – instead of taking their produce to the wholesale market they sold it at the farm gate – and yet received better remuneration.

For a long time, it has been argued that FPCs can improve the returns farmers get for their produce while possibly reducing the prices that consumers pay for the final product. FPCs are village level companies registered under the Companies Act.

The central government had announced a five-year tax holiday for FPCs in the 2018-19 Union Budget with the hope that these bodies would allow farmers to earn more. FPCs work on the principle of aggregation and improve the bargaining power of farmers both in the wholesale markets as well as in the market of inputs such as fertilisers and seeds.

Ramling FPC is not the only one that has been active this year. Of the 30,000 tonnes of onion that the National Cooperative Agricultural Marketing Federation (Nafed) has been offloading in the past few weeks to cool down onion prices, about 25,000 tonnes has been produced through MahaFPC, the apex body for village level FPCs in the state.

Read more of this in a report by Partha Sarathi Biswas published in The Indian Express... (Link given below)

Let me start this months topic by wishing you a Happy New Year. May this New Year bring health, happiness and harmony in your life. I am sure, you must have some New Year resolutions in your mind. You would like to achieve some milestones in your life. All of us try for that. That is how life moves
END_OF_DOCUMENT_TOKEN_TO_BE_REPLACED