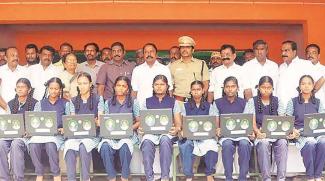 On Teacher’s Day, Tamil Nadu’s school education minister K A Sengottaiayan took everyone by surprise when he announced a bold new scheme that aims to turn old fashioned classrooms into digital ones. Sengottaiayan had just returned from Finland, where he studied their model of the school education system, and wanted to reform the state’s school system on similar lines.

As part of a comprehensive package, the state government has launched a new television channel dedicated exclusively for school students. In the past, TN had provided free laptop computers to students. In the latest announcements, it promised a laptop for every teacher in government and government-aided school in the state.

To complete the digital experience, classrooms are also set to get a massive makeover that will see blackboards being replaced by digital boards and students receiving “smart” report cards with QR codes. The disbursal of laptops is already underway in higher secondary schools, and the state is figuring out how to provide it for the rest of the eligible teachers in the state.

This is not the first time that Tamil Nadu has led with such an innovation aimed at improving education and health systems in the state. The laptop scheme for students, for instance, attracted a lot of experts from other states, wanting to study its feasibility.

The fact is, regardless of which political party ruled the state, Tamil Nadu has been known for unconditional allocation of funds in education and health systems.

Read more of this in a report by Arun Janardhanan published in The Indian Express... (Link given below)

Let me start this months topic by wishing you a Happy New Year. May this New Year bring health, happiness and harmony in your life. I am sure, you must have some New Year resolutions in your mind. You would like to achieve some milestones in your life. All of us try for that. That is how life moves
END_OF_DOCUMENT_TOKEN_TO_BE_REPLACED