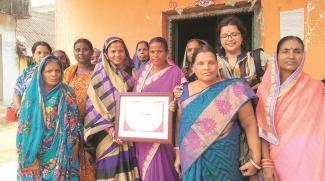 “We no longer have to beg or steal from the men to pay tuition fee for our children,” says Samsa Begum, 34, as the women around her nod in agreement.

The women, part of a Self Help Group (SHG) from Arakhapalli village in Khordha district, are elated that they have made Rs 1.7 lakh in profit this year after selling the harvest from a pisciculture project set up last year under the Odisha government’s Mission Shakti.

Now overseeing six lakh SHGs with 69 lakh women, Mission Shakti, which the Naveen Patnaik-led BJD government began in 2001, ensures government departments help SHGs with sustainable income practices and lifestyle changes. This is an improvement over the usual thrift-and-credit mechanism of SHGs, where women lend to each other or leverage bank loans.

In Arakhapalli village, women SHGs have been encouraged to take up pisciculture, with Mission Shakti and the state Fishery Department leasing ponds to women for Rs 2,000 per acre per year, against market rates of about Rs 50,000.

The government also provides around 60 per cent of the project cost as subsidy.

To increase the lure of economic ventures for Odisha’s women, Mission Shakti is incubating those that combine food security with an income source.

Read more of this in a report by Sampad Patnaik published in The Indian Express... (Link given below)

Let me start this months topic by wishing you a Happy New Year. May this New Year bring health, happiness and harmony in your life. I am sure, you must have some New Year resolutions in your mind. You would like to achieve some milestones in your life. All of us try for that. That is how life moves
END_OF_DOCUMENT_TOKEN_TO_BE_REPLACED